We’re open and delivering as normal 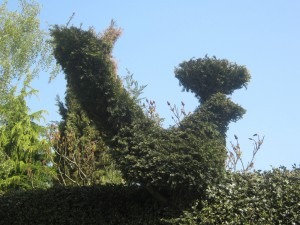 He has copped a great deal of flack in the press this year, but banking boss Stephen Hester opened the gates of his palatial mansion at the start of the month to help raise money for charity.

Visitors to the RBS supremo's Oxfordshire pile strolled around the extensive 350-acre grounds, enjoying sights such as the outdoor swimming pool, various ponds scattered among the scenery, various garden statues – some of them cunningly hidden behind features and shrubberies – and a vast walled garden containing some beautiful plant specimens.

Some of the more bizarre sights included a hedge cut to resemble a horse leaping a fence, among other feats of topiary, plus a rose parterre and a paddock - “Fatty's Paddock” – which contained real horses.

Mr Hester's garden has been described as “one of the most significant contemporary gardens in Britain,” and perhaps it is just as well that it looks as fine as it does, considering his status as chief executive of a bank bailed out by taxpayers.